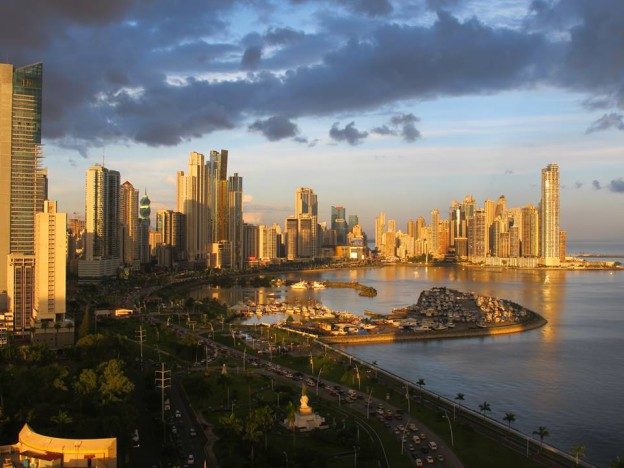 _In Panama there are no earthquakes, neither hurricanes nor tsunamis. We are in the middle of the continent. Our airport connects with on time flights to all America daily. We are the perfect country to invest.

Ricardo Martinelli – President of the Republic of Panama

In recent years, Panama has experienced an accelerated growth of its economy. In 2011 the country experienced a milestone with a spectacular GDP growth of over 12%. According to the IMF, in only six years – from 2003 to 2009 – Panama´s GDP doubled. Skyscrapers arise everywhere; multinationals regional headquarters arrive by dozens and the country enjoys an almost full employment rate. A quick analysis might lead to the conclusion that we are experiencing a “Panamanian miracle”. At a simple glance, an investor would think that he has found its paradise: strong rule of law, security, absence of natural disasters, flight connections to all the Americas, a dollarized economy, incentives, relatively low salaries, affordable prices… For all those reasons, Panama might seem to be the perfect country to invest.

However, nothing is so perfect. Clouds are starting to appear on the horizon: Panama faces several challenges in the short term that could sharply curb this growth spurt and put serious strain on the local economy. The good news is that if the right policy decisions are taken, it will be possible to keep Panama in the growth path.

First of all, Panama experienced a downturn of this year’s growth to around an 8% of GDP. Although not disastrous, it is far from the double-digit growth of the last few years. When Panama finishes the construction of several major infrastructures – such as the expansion of the Canal, the first Metro line or the reorganization of roads and avenues in Panama City – several experts fear a recurrence of unemployment and greater economic slowdown. The Government is convinced that the enlarged canal will act as a springboard for the logistics sector, boosting its contribution to GDP by $600 million to 1 billion and adding 30,000 new jobs by 2020. However, recent events around the Canal expansion put these economic benefits at risk in the short term. The Panama Canal contributes around a billion dollars to the Panama Treasury every year. Grupo Unidos Por el Canal – GUPC – has just reached an agreement with the Panama Canal Authority –ACP to inagurate the Canal on December 2015″ (this will undoubtedly cause millionaire losses)”.

Secondly, there is an energy challenge on the table. Panama’s rapid growth has also meant an unprecedented increase in the demand of energy, which is growing at an annual rate of between 80 and 100 MW. Martinelli’s government promised that future tenders would be only on renewable energy in his electoral program. Last December, for example, the first phase of the new wind farm started generating its first MW. However, new coal and liquefied natural gas –LNG – plants were also approved. This government erratic short-term energy policy prevented the arrival of the much-needed investments to support demand increase with a steady supply. However, the most urgent issue in this sector is not building new power generation plants but the installation of adequate transmission and new high voltage lines. Almost 60 % of the electricity generated in the country comes from its hydroelectric dams, located mostly in the Chiriqui region, many of which can not transmit all the energy being produced due to the lack of an adequate transmission. According to the Secretary of Energy, there is a capacity of 1,200 MW installed in Chiriqui and Bocas del Toro. However, transmission lines have a capacity to transport only 600 MW.  This challenge can be corrected if the three new required power lines are built. Plus, the international connection with Colombia through the Darien National Park would also ensure greater energy supply. Its construction, nonetheless, was paralyzed last year by President Martinelli due to its high costs: $500 millions. Some local energy generators are not interested in the construction of this new international transmission line that would contribute to decrease energy prices for Panamanians.

Anyway, the energy problem must be fixed as soon as possible as it can seriously delay Panama´s growth. Last summer, energy shortages were a real problem: the Government suspended school attendance during different days to save energy and the services sector experienced some restrictions in the use of energy too. The high dependence on hydroelectric dams that at that time had not sufficient water to produce the required MW, will keep creating problems to the country in the short term.

Thirdly: there is a problem with the lack of skilled staff, which worries many business leaders. The landing of more than 100 regional headquarters of multinationals settled in Panama due to the enactment in 2007 of the famous Law 41 – which provides an interesting array of incentives – has rapidly increased the demand for skilled workers. The inability of the Panamanian labor market to provide such amount of people trained – many positions require college – made these corporations bring in expatriates to fill positions. Panama has also started to be a net recipient country due to the countless career opportunities that appeared in all the sectors. The government took short-term measures to help companies hire the required personnel, through relaxation of Visa requirements, especially to some nationals included in the visa program “Naciones Amigas” where Spain is included together with other 23 countries as Canada, Argentina or Australia. Despite these measures, some sectors as the banking and financial one are experiencing a sort of “talents war” where companies steal skilled staff ones to the others artificially increasing salaries and promoting a short-term job mentality.

Different multinationals have experienced a shortage of skilled professionals, as Hewlett Packard, which is missing around 600 English-speaking computer engineers. Some of them have even stopped their expansion plans in Panama due to the impossibility to find the required workers.

The current administration has done its job building several infrastructures which Panama lacked such as the new Metro of Panama City – which will be inaugurated this month -; improvements in roads both inside Panama City and in the provinces; the construction of new airports; or the expansion of the Tocumen Airport.

Regarding the tourism sector, the Panama Tourism Authority seems to have done its job boosting the number of international visitors arriving to the country. The revitalization of areas such as Casco Viejo in the capital – a protected UNESCO Human Heritage site – together with the attraction of new international flights – as the new Air France Panama-Paris daily connection – has enticed investors to build world-class hotels in Panama City as the new Waldorf Astoria hotel or the future Ritz-Carlton one. The new Frank Guery designed BioMuseo will complete the interesting offer Panama has for visitors. Plus, MICI tourism segment will surely experience a growth too, thanks to the new Amador Conventions Center, opening this year.

To sum up, Panama has a huge growing potential for the following decades. It will really be its Government actions and decisions that will determine if Panama becomes the “Latin American Singapore” or not. If the next administration – starting after the general elections this May – secures the Canal expansion to be ready by next year, works hard to fix the energy challenge and increases the investments in education, Panama will keep growing, shortly becoming a full-developed country.