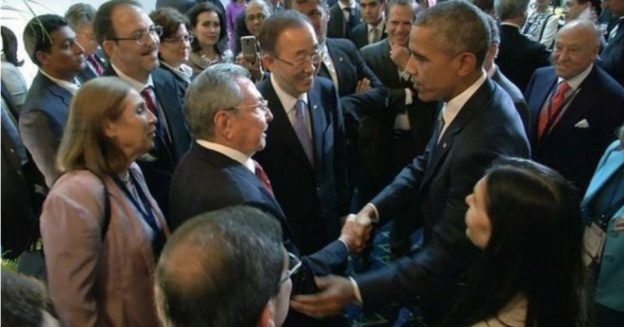 Up until 2015, a general overview of the Summits of the Organization of the American States would have depicted an overall opinion of a forum rather then a quorum.

Nevertheless, between the 10th and 11th of April 2015, this Summit has actually made history with its theme “Prosperity with Equity: The Challenge of Cooperation in the Americas“. Every single word of it can actually be associated with the key actors that now have opened a window of opportunity: the United States and Cuba.

The 7th Summit tackled several sub-themes, among them education, health, energy, environment, migration, security, citizen participation and democratic governance, but somehow the attention of both press and participants was drawn to US and Cuba, the stars of this premiere. Cuba, listed along with the other 34 independent states of the Americas that ratified the OAS Charter, has been enjoying this status since June 2009 when the Ministers of Foreign Affairs of the Americas adopted resolution 2438 that resolves that the 1962 resolution, which excluded the Government of Cuba from its participation in the inter-American system. In 2015, Cuba was the one member-state in the spotlight after the US clearly stated a position of rapprochement, willing to stop embargo as soon as the Congress approves, and look up to the future.

Skepticism or abstention were not tools to be used between 10th and 11th April in Panama, but instead a contagious optimism characterized the participants, being head of states, partner institutions or social actors. Another peculiar fact was the one regarding the tweets on Handshake as operative word at the 7th Summit of the Americas, such as the one was between John Kerry and Bruno Rodriguez, as some kind of sequel for the previous mentioned ones and as an indicator of an executive continuity after the political decisions.

Somehow, the rest of the events from the Summit were put in a bit of shadow and less boosted on the social/media, but still interesting to notice. One was the protest towards Nicolas Maduro, a noisy “cacerolazo”, which he delicately tried to ignore. Another one was the dialogue between the US and Brazil: trying to overpass the 2013 NSA scandal, the two parties concluded with a scheduled state visit of Dilma Rousseff to Washington at the end of June.

Since the Summit occurs every three years, it is most certainly worth wondering how these relations will look in 2018. By then, Obama will not be the one in charge in the Oval office, and now it is still too soon to tell who will win the next presidential race in which at least Hillary Clinton (from the Democratic Party) made it clear to run. Opening dialogue with Cuba has been a move related to Obama’s presidency, so it is at least questionable at this point whether it will still receive a boost from the next president, or if it will be put on hold with a diminished attention. For the time being, however, there is a clear can-do-attitude from their behalf, as if Cuba had been waiting for the US to knock on their door and them to welcome in their island the awaited support from the continent’s strongest actor. Nevertheless, for the time being it seems like both actors want to bridge the 90-mile waterway between them, while cautiously acknowledging that this might take more than 90 minutes debriefing during a Summit.