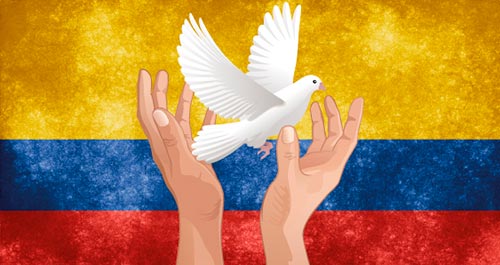 Colombia, the most market-friendly country in Latin America, has been growing thanks to its fiscally responsible programs and its broad economic base, which includes well-established services, manufacturing, oil and gas sectors and mining.

In 2002, President Uribe won the elections with the promise to face this riskand launched the Democratic Security, a new strategy that massively expanded Colombian armed forces. The strategy comprised negotiations with the right-wing paramilitary groups and incorporated the civil society in different ways, as rewarding informers or by arming peasants o fight left-wing guerrillas. In the short term, the Democratic Security successfully diminished the associated risks of the armed conflict coming from the left-wing groups with a 48% less murders during Uribe´s two presidential terms.

However, several authors pointed out the Democratic Security unsustainability in the mid-term as it did not address the socioeconomic roots of the problem. This strategy only tackled some of the risks that Colombia faced, leaving other crucial risks unattended and even increasing them or creating new ones: for example, the civil society involvement in the State defense increased their exposure to the armed conflict. The Democratic Security also increased the risk of Human Rights abuses by the Army or the peasants armed groups, manufacturing new uncertainties, some of which posed risks greater than those they were designed to control. The pressure faced by soldiers from the Uribe administration created a risk revealed in 2008: the false positives. Around 1,000 innocent civilians were allegedly assassinated by officials of the Colombian Army. Soldiers pretended that those civilians were terrorists or members of the guerrilla killed in action to present better results and obtain the financial rewards offered per person killed.

The Democratic Security policy also neglected the risks created by inequality. Indeed, the Uribe Administration raised the security public expenditure from a 2% of the GDP to a 4% in 2009, with 120,000 new soldiers and police officers. This decision victimized the majority of the population as physical security spending was at the expense of other sources of security, as health, education and welfare. Uribe ended his mandate leaving Colombia as one of the most unequal countries in the world with a 0,59 Gini Index. The land ownership concentration was even worse, with a Gini Index of 0,80. Land redistribution and inequality reduction through strong social policies are historical FARC claims that the Democratic Security strategy did not address.

The Democratic Security hard military approach skyrocketed another risk: land mining. The FARC installed these artefacts in response to the huge offensives suffered by the Army. The FARC had to adopt guerrilla moves and land mining to counterbalance the loss of effectives, producing around 11,000 victims of injury or death due to landmines.

Finally, the Democratic Security also increased Colombian political risks due to the Colombian Army operations launched in the territory of Ecuador to kill one FARC leader, and in Venezuela to kidnap another FARC leader. Those movements augmented the risks to start a conventional armed conflict between Colombia and its neighbours.

To sum up, and despite the decrease in insecurity levels, the Uribe strategy has aggravated existing risks and created new ones. Plus, the FARC have not been defeated. On the contrary, they still keep an important capacity to attack and resist, showing the ineffectiveness of the Democratic Security. It is not sufficient with strengthening the military: there is also a need to complement those efforts with development and integration initiatives within the conflict zones, through negotiated solution, solving the armed conflict from its roots. On the other hand, Uribe´s chose to only negotiate with right-wing Paramilitaries strengthened them and the interests they want to keep: lands and sometimes drugs smuggling. In fact, Paramilitaries are the main Human Rights offenders in Colombia.

In 2010, Juan Manuel Santos, Uribe´s Minister of Defense, ran for president with the compromise of continuing the Democratic Security. However, some months after winning the elections, Santos started to integrate actors and ideas from other political parties and launched a more social-democrat approach: the Integral Security and Defense Policy for Prosperity, which substitutes the Democratic Security approach. Santos shifted from most of Uribe´s positions, starting with the approval of a land ownership restitution. He also re-established diplomatic relations with Educador and Venezuela. However, the most innovative aspect was negotiations with FARC, starting in October 2012. Santos’ approach aspires to address and diminish the five security risks that the Democratic Security raised. First of all, in terms of the military expenditure and inequality reduction, Santos followed the frequently heard mantra in risk-management context of “no development without security and no security without development”. His redistributive approach reduced poverty levels from the 40,3% in 2009 to a 28,5% of the population in 2014. Plus, the Gini Index went down from in 0,56 in 2009 to 0,53 in 2012.

Secondly, the peace process has reduced the civil society exposure to a minimal involvement and has almost ceased the aforementioned false positives. Land mining has also been cut down thanks to the negotiations with FARC, the most prolific user of anti-personnel mines among rebel groups anywhere in the world. In the latest talks round, the government and the FARC, agreed to immediately start to work together to clean up some rural areas of landmines and unexploded ammunition.

Finally, the risk of having an armed conflict with neighbours has been addressed with Venezuela and Ecuador rapprochements, proving Santos’ focus on regional integration, especially in the framework of Unasur. Peace talks have stopped Colombian attacks to FARC in neighbours’ territories and have helped to approach diplomatic relations with other states, as Norway and Cuba -guarantors of the peace process.

However, the Integral Security and Defense Policy for Prosperity carry new risks, falling to tackle the entire problematic again, as it puts an excessive emphasis in the FARC. For example, the land ownership restitution law has mostly favoured multinational corporations, as the peasants leaders are systematically being killed by paramilitary groups that are still strong. There is also a secondary political risk that Santos’ policy has created: Colombian citizens perceive deterioration in the security environment as a result of the government’s failure to strongly implement military strategies to defeat of illegal armed groups as hostile acts have effectively increased, mainly perpetrated by the FARC.

During negotiations, even with FARC declared truces, the Colombian Army kept its operations with a 12% the security and defense budget increase. Santos cannot simply stop Army operations: even if he was re-elected last June, defections in the Congress can happen, forcing him to find allies and a balance between the FARC expectations; the traditional conservatism of a majority of the population and the fierce opposition of Uribe. Another issue is that, even in the event of an agreement, it is probable that hotbeds of insecurity will continue locally: FARC leadership, weakened by the military actions of the authorities, does not control all of its troops who sometimes engage in criminal activities such as coca cultivation. Plus, FARC is not the only insurgent or criminal organized actor: the ELN, another left guerrilla, and BACRIM, which are criminal groups with paramilitary backgrounds, are not far behind. Santos approach is not tackling the risk posed by these two criminal actors. Finally, he has also not included the native indigenous leaders in negotiations that refuse the presence not only of the FARC but also othe Army, expelled from the region. Conflicts with these groups affect oil exports as indigenous people attack oil pipelines. This absence of communication channels between the government and some other social groups will keep on delaying the complete pacification of Colombia.