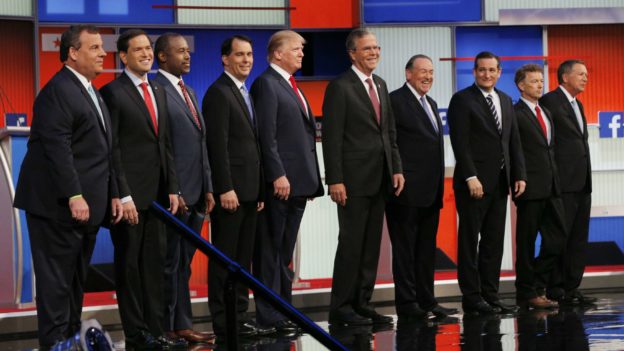 Republicans in the debate

Out of the 17 candidates for the nomination, only 10 participated in the debate organized by Fox News during primetime. Fox took into account a recent data analysis from five national polls for the selection of participants in the main debate. Some candidates like Rick Santorum showed their opposition to this measure, although they held a debate earlier.

These are, broadly speaking, the elements that identify the campaign of each candidate.

Donald Trump focused his speech on criticizing the US politic elite, based on his experience as a successful entrepreneur. He stated that only someone like him, detached from politics, is able to redirect the course of the country. His reproach to immigrants from Mexico has unleashed a wave of criticism.

Jeb Bush is the brother of former US President, George W. Bush, and son of another US President, George Bush. He has shown a great connection with the Latin community and has supported immigration reform that guarantees equal opportunity for Hispanics. In addition, Bush is a leader in raising funds for the campaign, in particular through its Political Action Campaign “Right to Rise.”

Scott Walker has been the Governor of Wisconsin since 2011. In his State, he proposed legislation against abortion and birth control pills, he is against gay marriage and immigration reform, and he undermined the power of trade unions.

Mike Huckabee was a Baptist preacher and he had his own TV show “Huckabee” on Fox News until January of this year. He defends a more powerful US intervention in the Middle East. Huckabee had stated that gay marriage reflects a “persecution” to the Christian community in the United States.

Ben Carson is characterized as the most inexperienced in the world of politics, something that he boasts about in his public speeches. In February 2013 he won the admiration of conservative Republicans due to his critical speech he delivered on the work of President Barack Obama at the National Prayer Breakfast.

Ted Cruz appeals to the most conservative wing of the Republican voters and he is a favorite among the Tea Party activists. He favors the free market with minimal intrusion from the federal government. He is in favor of an aggressive foreign policy against terrorism.

Marco Rubio wants to get the Latino vote and presents himself as the youthful future of a Republican Party that has trouble connecting with an increasingly diverse electorate.

Rand Paul advocates individual freedom and minimizing the role of the government. Paul has led the opposition against the massive NSA spying and is the candidate who proposes more isolationist foreign policy matters.

Christie has been the governor of New Jersey since 2010. He previously served as attorney general of New Jersey. Christie opposes gay marriage and interventionist foreign policy.

John Kasich calls for an independent tax system, greater health coverage affordable for the middle class, which has bothered the Republican Party, and increased investment in the Armed Forces. In 1999, he ran for presidential elections, but withdrew before the primary process after he did not raise enough funds.

The most significant event so far has been the debate that took place last Thursday. Immigration, jihadist terrorism, Iran and the Democratic criticism of the Democratic frontrunner, Hillary Clinton, have occupied the questions and answers of the debate. Also, the foreign policy of President Barack Obama was a topic of debate. The candidates have accused Obama of undermining the country. Similarly, all candidates have opposed the nuclear deal with Iran and have promised to end the agreement immediately if a conservative gets to the White House in the 2016 elections.

In light of this situation, Trump, the most controversial candidate, said he would not support any other Republican candidate. This is one of the biggest concerns of the Republican Party because it would clearly harm their position against the Democrats, due to the possible fragmentation of the conservative vote.

Trump is the candidate who is attracting the most interest in the media due to his controversial statements. During his campaign he said that many Mexicans are criminals and rapists. Today, the billionaire is leading all opinion polls and Internet searches among the candidates of his party.

The plan of the majority of Republican candidates to grow the economy would be to eliminate President Obama’s healthcare reform and implement tax cuts.

While this debate, held in primetime, did not disclose any winner, it is only the beginning of a long primary process. The presidential election will not take place for another 15 months, but these current debates are of the upmost importance for voters and also donors.